Tipu Sultan’s Summer Palace is located in Bangalore, India. It was the summer residence of famous king of Mysore, Tipu Sultan. This palace is also known as Dariya Daulat Bagh, which means  “wealth of the sea” in English. The architecture of this palace is a mix of Indian and Islamic Architectures called Indo-Sarcenic style. This fort was constructed between 1778-1784 within Bangalore port. The construction was the idea of king Hyder Ali in 1778 and was completed by Tipu Sultan on 1784 AD after Hyder’s death. 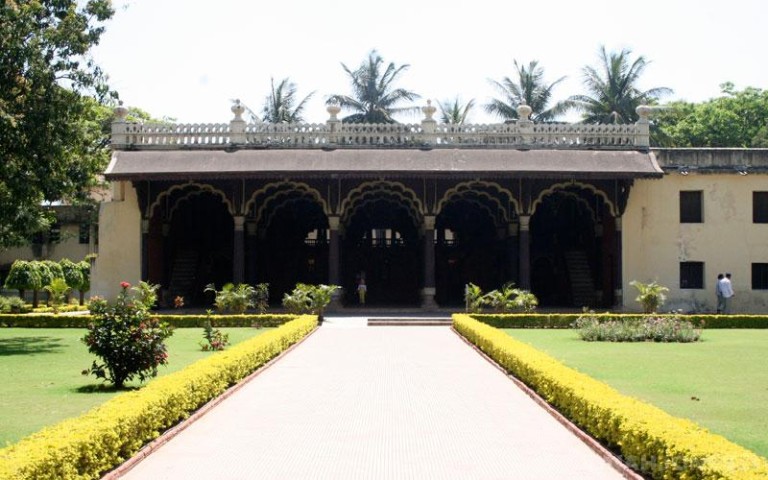 This construction surrounded by many immaculate well-maintained gardens to ensure cool of summer. The structure was made with teak wood inside the palace. This palace has a rectangular design with open corridors on all the sides of the platform, even after 250 years has managed to survive from many atmospheric conditions. The outer walls are covered with portraits and events from the battles and floral-patterned canvas is pasted on the wooden ceiling of the palace. The front of the palace has huge wooden pillars with base of stones. It has arches and brackets colorfully painted in further highlight the carvings done on them. On the eastern and western side there are walls and other two sides there are bay with pillars. This double storeyed palace stands adorned with pillars, arches and balconies. There are four smaller rooms in the corners of the first floor which were used to be known as Zenana Quarters. The constructor of the palace was ofter call this as the ‘Abode of Happiness’ and ‘Envy of Heaven’.  Sadly, due to lack of maintenance by the authorities, many of these paintings have all but vanished today.

British were used this palace as a secretariat after Anglo- Mysore war  until 1867 they they moved to attrah kacheri . This fort today contains the Ranganathaswamy Temple and Jama Masjid. Right outside this fort is a Gumbaz that has the tomb of Tipu Sultan, tomb of Haider Ali, father of Tipu Sultan and the tomb his mother.

The place is maintained by the Government of Karnataka and is open for public visits from 8:30 AM to 5:30 PM.

The Summer Palace of Tipu Sultan is one of the main tourist attractions near Mysore, in Srirangapatna. which is an island in the Kavery River, around 14 km from Mysore. 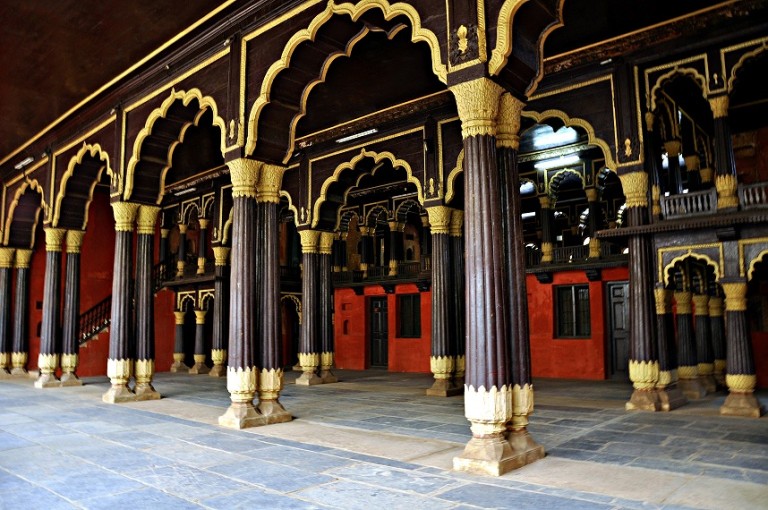 The top floor of the Palace has the Tippu Sultan Museum that houses a collection of Persian manuscripts, objects related to Hyder Ali and Tipu Sultan. Clothes of Tipu Sultan, his crown, Silver vessel which belonged to Hyder Ali, war weapons, coins etc. have been showcased here. Another priced possession of this museum is the popular oil paintings done in 1800 by Sir Robert Ker Porter, ‘Storming of Srirangapattanam’. This historical work is a depiction of the war event of the final fall of Srirangapatana that took place on 4th May in the year 1799. There is also a painting of the grand throne visualised by Tipu Sultan. The throne was coated with gold sheets and studded with precious emerald stones. The extremely precious throne was dismantled and its parts were auctioned by the British.

The rooms in the ground floor have been converted into a small museum showcasing various achievements of Tipu Sultan and his administration. Even today, there are patches of original paint on the walls of the Summer Palace.

Tipu Sultan Summer Palace is located in the town of Srirangapatna which is around 24 km away from Mysore city. There are regular buses from Mysore to Srirangapatna. Tourists can also hire a taxi to the palace from Mysore. For commuting within the town, auto rickshaws are readily available. The palace is inside Bangalore Fort in Karnataka which is easily accessible from all states and cities of the country. Bangalore is a city which is well connected through air, rail and road routes. Get down the city bus stop and the fort is at a walking distance. The Tipu Sultan Summer Palace stands inside the Bangalore Fort which is located on Albert Victor Road, Chamrajpet in the centre of Old Bangalore near Kalasipalyam bus stand in Karnataka.

(Note-Children under 15 years are admitted free. Ticket counter is near the main gate.)